Widespread throughout Australia. Australian Ravens are black with white eyes. The feathers on the throat (hackles) are longer than in other species and the bird tends to extend these when calling. Ravens are generally seen in pairs.

There is little real difference between Ravens and Crows except that “Crow” is applied to the smaller species.

It is common in most wooded habitats. Rather solitary, seldom seen in large flocks. It is a particularly wary bird except in suburban areas or at the Golf Club where it is very bold diving into golf bags and stealing any food it may find. Diet consists of grains, fruits, insects, small animals, eggs, refuse and road-kill. However, the Australian Raven is mainly carnivorous.

It constructs a large untidy nest consisting of a bowl of sticks, lined with grass, bark and feathers. Both sexes construct the nest and feed the young. They generally have 3 to 5 eggs, pale green profusely blotched or marked with shades of brown. Breeding season is July to September. Incubation is solely by the female and only one brood a year. 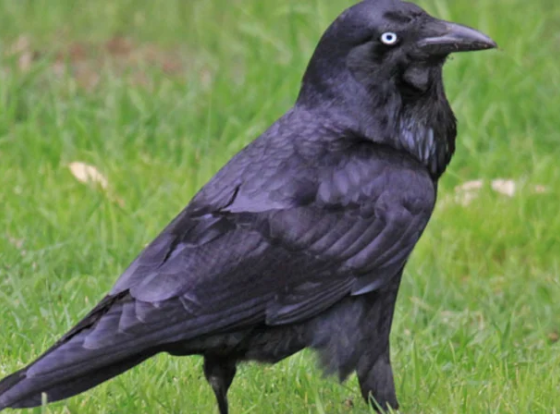