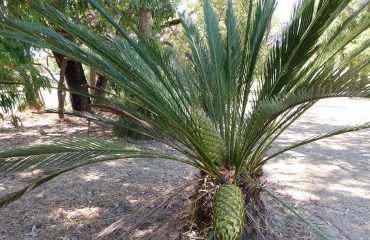 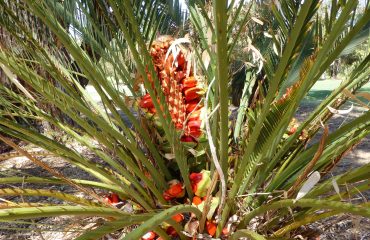 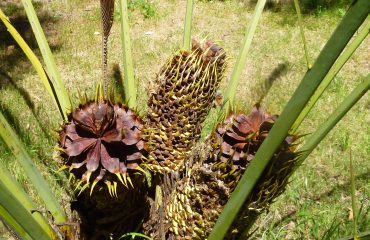 Macrozamia riedlei (common name Zamia or Zamia Palm) is a species in the Zamiaceae family. It is endemic to Western Australia. Found on lateritic soils and in Jarrah forests. The nuts or seed cones are barrel-shaped and 30cm to 40cm long and 10cm to 15cm in diameter. The seed cones have been successfully utilised as food by Indigenous Australians – however eaten raw by European explorers incurred poisoning. Reported cases of poisoning from the Zamia palm are perhaps the earliest for any local plant. Zamia is mentioned as causing sickness in men eating the seeds namely Vlaming in 1697, La Perouse in 1788, Flinders in 1801, and Sir George Grey in 1839.

Being a cycad this species is dioecious, meaning that female and male reproductive organs are situated on separate plants. Female plants typically bear 1-3 cones which are glaucous, erect, then drooping when mature and barrel-shaped. The seeds are oblong to ovoid in shape and with an orange, bright red or sometimes yellow fleshy covering. Male plants bear 1-5 glaucous cones, which are erect, then drooping after pollen is shed and cylindrical.

Because of the large size of the seed cones, it is believed that large bodied herbivores are required to act as dispersal agents. Currently, the Emu (Dromaius novaehollandise) is considered to be the primary dispersal agent for M. riedlei. Due to anthropogenic activities, much of the habitat of M. riedlei is becoming fragmented primarily through agricultural and residential land clearing. This leads to the potential restriction of long distance dispersal of seed, required for healthy gene flow and the ability for range expansion in the face of an uncertain climatic future.

This is neither a tree nor a palm, but a cycad, an ancient plant group that has existed on earth for 200 million years. The hard sharp leaves would have made for tough chewing by the dinosaurs. Its distribution is similar to that of Jarrah.

There are separate male and female plants, both of which produce pineapple like cones, the males being longer and narrower. Until recently it was thought that they were exclusively wind pollinated, but now a weevil is thought to be important as well. The male cones produce a pheromone which attracts the weevils which become covered with pollen. Then the odour is cut off and the nearby female cone emits its pheromone which brings the weevils flying across with the pollen. Before the seeds can be damaged, a repellent pheromone sends the weevils back to the male plant.

The Aborigines used the leaves for thatching and the fluffy “wool” at the bases of the leaves for kindling. Early settlers used this “wool” like kapok for stuffing mattresses.

Aborigines also relished the seeds and they knew how to remove the poison. Not like the first European visitors to the Swan River, the Dutch, who liked the look of the large walnut like seeds. They ate them and within a few hours were “nigh unto death” with excruciating abdominal pain. They recovered, but deaths have been reported.

The common name Burrawang, originally referring to M. communis in the Daruk Australian Aboriginal language, is often used for all the species in the genus.

“Do not be afraid to go out on a limb…That’s where the fruit is.” (Anonymous)