Location: Between 12th green and the women’s 18th tee. 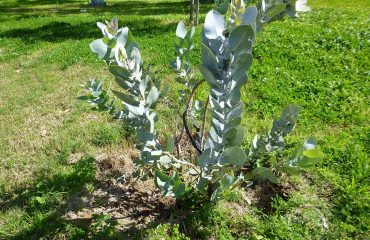 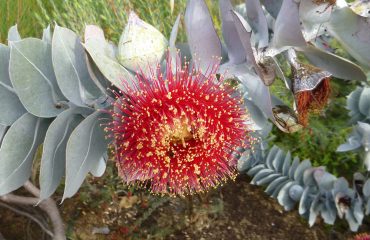 Eucalyptus macrocarpa, or Mottlecah, is a mallee Eucalyptus that is native to the south-west of Western Australia and noted for its large, spectacular flowers.

It is sprawling in habit and grows to between 0.8 and 5 metres in height. The silver-grey leaves are ovate-elliptic, sessile and are up to 12cm long and 8cm wide. The red, pink or cream flowers are up to 100mm in diameter and occur in early spring to summer and from late autumn to early winter. They are followed by large bowl-shaped “gumnuts” which give rise to the Greek-derived specific name macrocarpa – “makros” (large) and “karpos” (fruit). They are covered in a whitish bloom.

The flowers form a striking display, contrasting with the white powdery appearance of the leaves and branches, and, as William Jackson Hooker says, “the colour of the flowers is due to the stamens alone; for petals (as in the genus) there are none, and the calyx falls off like the lid of a box.” He notes that it is common in the region of Drummond’s collection, and that a name for the species was Morral. The first description of the species was by Hooker in Icones Plantarum, using a dried specimen in James Drummond’s collection from the Guangan.

Eucalyptus macrocarpa is easily grown from seed, but requires good drainage and a dry, frost-free climate. It was raised from seed in 1842 at Kew Gardens and flowered in 1847.

“And this, our life, exempt from public haunt, finds tongues in trees, books in the running brooks, sermons in stones, and good in everything.” (William Shakespeare)