Location:  A 100 metre stand on the 7th hole extending towards the green from the top of the hill on the right 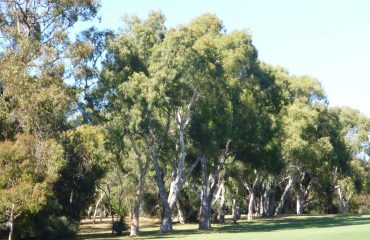 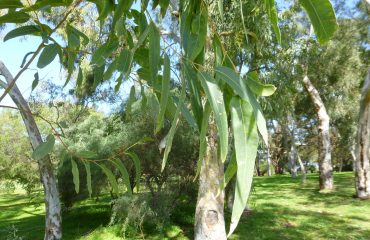 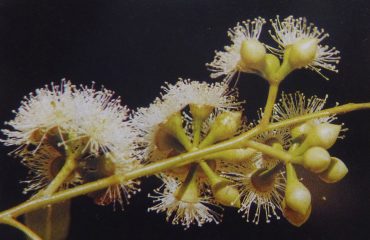 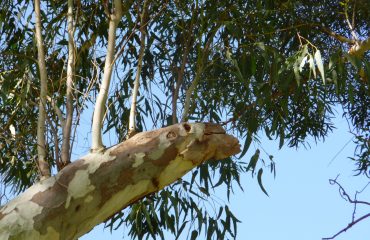 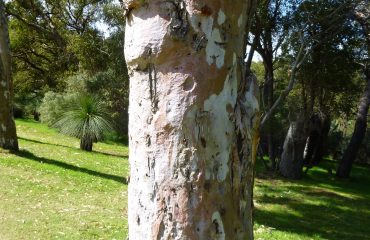 The variety Obtusa is prone to sudden limb failure.

The tree grows straight under favourable conditions and develops twisted and gnarled branches in drier conditions; somewhat like Medusa’s hair.

Perhaps that is why they occupy a special place in the hearts of many Australians, reflecting the unpredictability and often chaotic nature of the Australian bush.

There is an Italian connection to this gum’s specific name camaldulensis. In 1832 the Chief Gardener of the Botanic Garden of Naples in Italy described the first specimen after the Camalduli, a religious order of monks who had the tree growing in the monastery gardens near Naples.

The Red River Gum is the “Queens Tree” in Kings Park dominating the landscape and close to the Ceremonial Walk. She planted it in 1954. It is the variety E. camaldulensis var camadulensis. It thrives despite having been ring barked and then strap grafted.

An essential tree for the Aborigines, its wood was ideal for heating and making didgeridoos; its bark for making canoes; whilst its sap and leaves were employed for treating fevers, sore throats and diarrhorea. The Aborigines used to weave together the branches of the young trees in order to mark places of significance. As the trees grew, the branches then fused together to form rings. So-called “ring” trees are often found on waterways and were significant cultural markers for Aboriginal communities. Some served as boundaries between lands. Others were markers for places of abundance.

“One impulse from a vernal wood may teach you more of man, of moral, evil and of good, than all the ages can” (William Wordsworth)